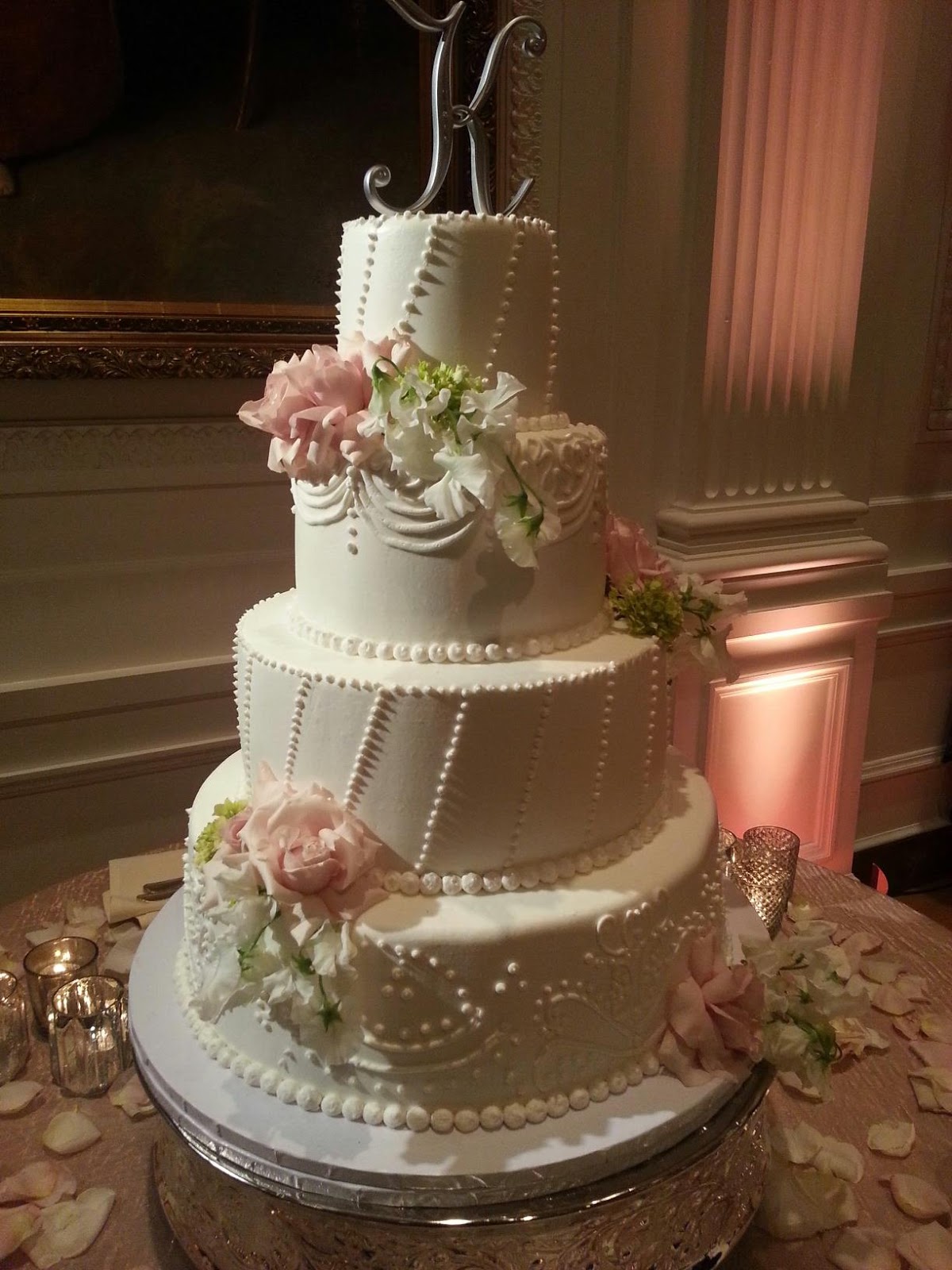 I attended a wedding this past weekend and this was one of the more beautiful wedding cakes I've seen. This cake is the epitome of the word sweet, isn't it? Much like the rest of the wedding, this cake was graceful and elegant. Furthermore, the food was perfect, the flowers were tastefully done, and the band was hands down the best live band I've heard at an event. I wish all weddings were this fun. :)
Posted by Nancy at 1:56 PM No comments: 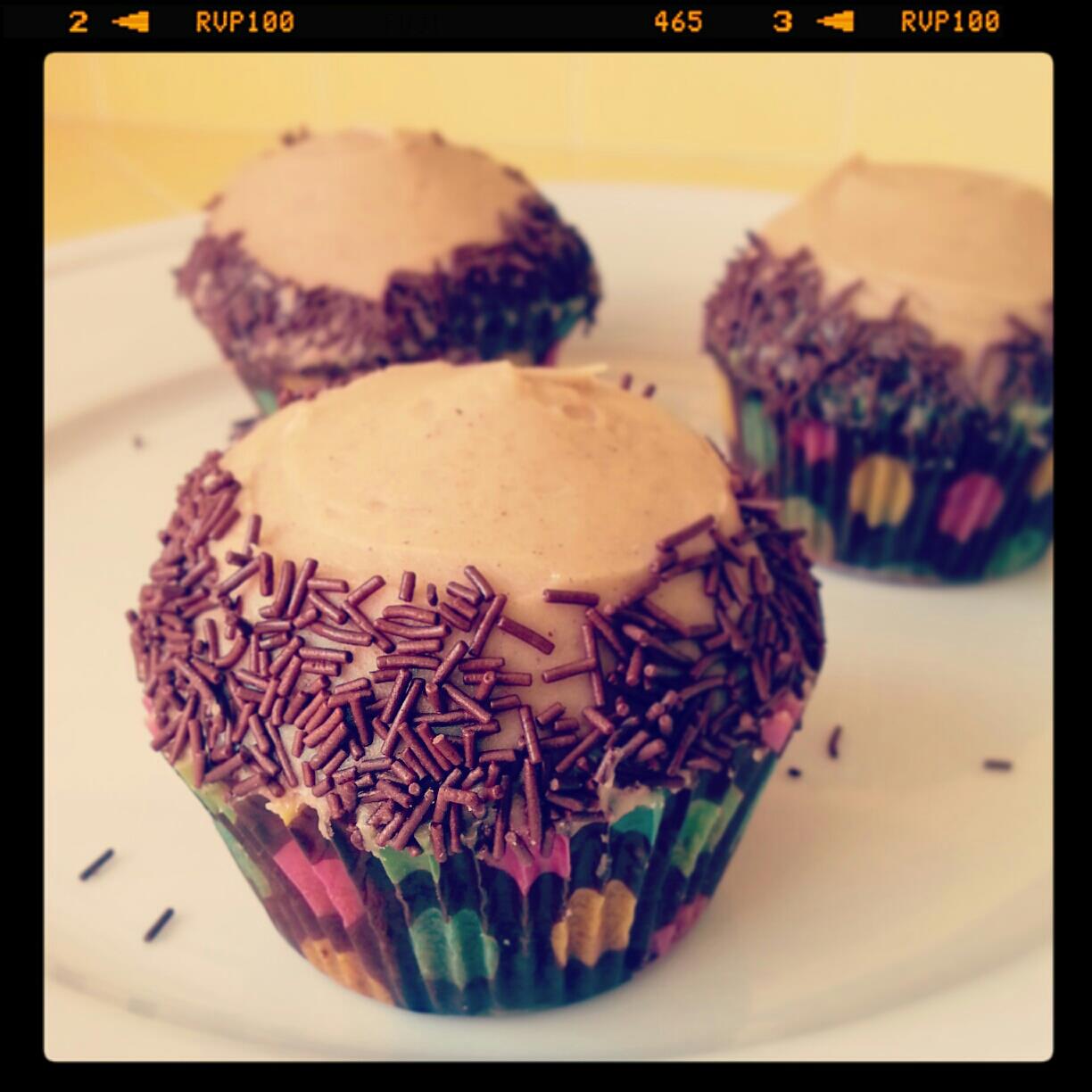 I've been on a cupcake kick lately, not wanting to bother with the torting and frosting of cakes that you're not even allowed to cut into and taste until the final presentation. I mean, how is it that people blog about making cakes for birthday parties and events and manage to shoot and style professional looking photos, complete with props and lighting? Just slide that little sliver back in and smooth more frosting over? Hmph. I tried out this "Sprinkles Cupcakes" peanut butter chocolate chip cupcake recipe out of curiosity. It's the one Candace Nelson demo-ed on Home with Lisa Quinn. Admittedly, I have never had the real thing since I usually stick to red velvet when I go there. I have to wonder, however, if it's the recipe for the ones they sell at the shop. In any case, it was a total win.

In summary, this was a great cupcake. I was worried that they were a little firm and muffin like (like a freshly baked chocolate chip cookie), but they were wonderful when combined with the frosting. They were a little too crumbly, possibly due to the 2 cups of chocolate chips (per dozen cupcakes) so I'd reduce that on the next round. I also found the frosting to be a bit fussy, which may have been attributed to the natural peanut butter I used which is not as thick and smooth as the "conventional" brands. The ratio given did not work at all, producing something to soft and not sweet enough. "Not sweet enough" will usually pass, but in this case, the saltiness of the peanut butter needs that sweetness to balance and brighten it up. I ended up added about double the powdered sugar which produced a frosting that was still a little less firm and structured that I'd normally like, but tasted just sweet enough to lighten the already rich cupcake. Taste always trumps appearance.

These were a hit with the bf and his coworkers (since he usually ends up bringing them to the office on Monday mornings). 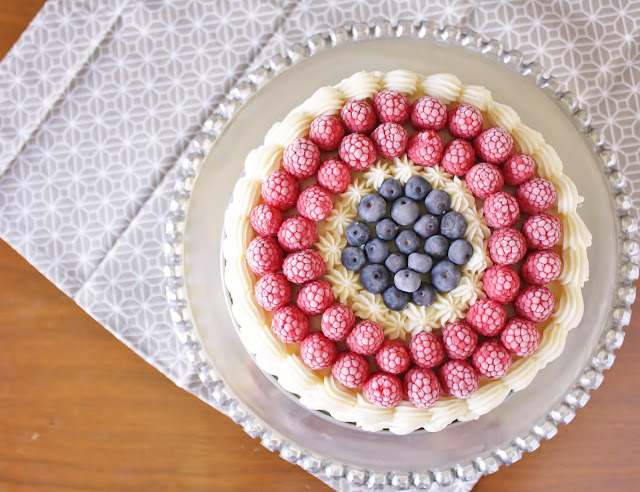 Every since I first got my hands on The Cake Bible, I have wanted to make the Star-Spangled Rhapsody cake. The thing about holiday cakes is, well, you've got to wait for the holiday to come around, and I was not going to miss this opportunity. I had been daydreaming about it for weeks. How many layers? What kind of filling? Keep the same decorative pattern?

As usual, the details of my cakes tend to result from what I have on hand. At that moment, it was a farmer's market with fresh ripe sweet strawberries, extra egg yolks from a batch of Swiss meringue buttercream, and two layers of white velvet butter cake I had in the freezer left over from baking for the Neapolitan cake last week. The cake was still not complicated enough for it to be fun for me, so somehow I decided it must be an ice cream cake. Must. 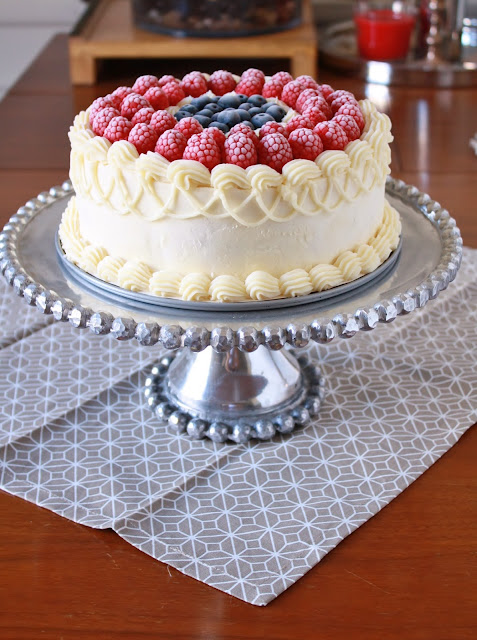 This was pretty good for a first ice cream cake. Although, I may have been a little obsessive with the over-freezing and dry ice transport. I might do a few things differently the next time.


Overall, I am simply very pleased with this cake. I think the red, white and blue just presents spectacularly as inspired by the Cake Bible showcase cake. This 8 inch cake also served 12 perfectly. There was apple pie too of course. So of course, you have to have both. You can't have 4th of July without apple pie. 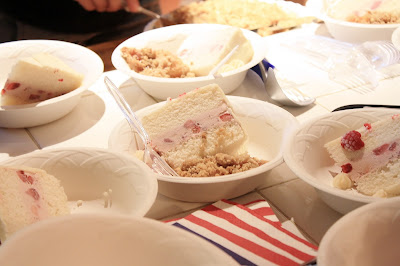 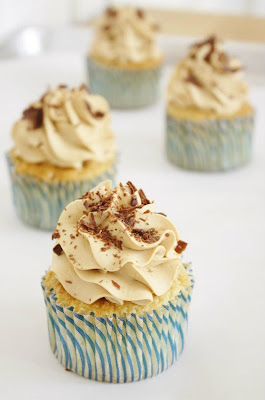 This is one of my favorite cupcakes. It's sweet and rich, and surprisingly really satisfies my sweet tooth even without any chocolate. If you've never had tres leches cake (proudly displayed in Mexican bakeries and supermarkets), it's a white sponge cake completely soaked in a milk combination, topped with whipped cream and some combination of fruits or chocolate. It sounds odd if you've never had it, but hey, think about French dip and au jus - it's better when the good stuff is soaked in. Yuummm.

This recipe requires a little more work in beating up and folding in egg whites. Then the milk has to be infused somehow. And then, after all that folding and baking and infusing, you don't even get to enjoy it until you let it sit overnight. But like macarons, the wait is totally worth it. Plus, using a meat injector to soak the cake, and getting to wave my giant syringe around in the kitchen and jabbing it defenseless cupcakes is just something you know you want to try.

Naturally, this cupcake is frosted with a variation of Swiss meringue buttercream (SMBC), utilizing dulce de leche. Dulce de leche is a sort of caramalized, sweetened condensed milk. Does that not sound like heaven? You can make your own, which I've done before, but I just don't always have the time so allowed myself a little shortcut and just bought a can of it. In my opinion, when you have make a SMBC base, you're allowed.